In my previous post we looked an unsuccessful way of trying to join data from subtitles and the transcripts.

We also took a peak at counts of lines between men and women across all eleven seasons.

Since then, I’ve been able to use rvest to scrape data from IMDB and Wikipedia and aded them to the subtitles and transcripts data frames. Adding the character names by season and episode from IMDB was particularly helpful in removing duplicates.

I did hear back from the creator of the subtools package and he gave me a really interesting idea.

Hi! Not sure I understand the question. You can do what you want with the timecode. It's a precious information for time series analysis

When I mutate the original air date with the time code out, I was able to a new variable that would let me perform a time-series analysis using sentiment data.

Let’s take a look at the data I’ll use for this portion of the analysis:

We’ll perform a sentiment analysis using the tidytext package. After the analysis, we’ll use this data for the next step:

The Bing lexicon looks all of the words in each line, unnests them and then assigns them a binary value of positive or negative like the example below:

After creating the dateTimeOut variable, we can then create another variable for each minute of the show and take the mean polarity of the entire minute.

Here’s the R code for reference:

Now we can plot the data giving us this chart for this particular episode: 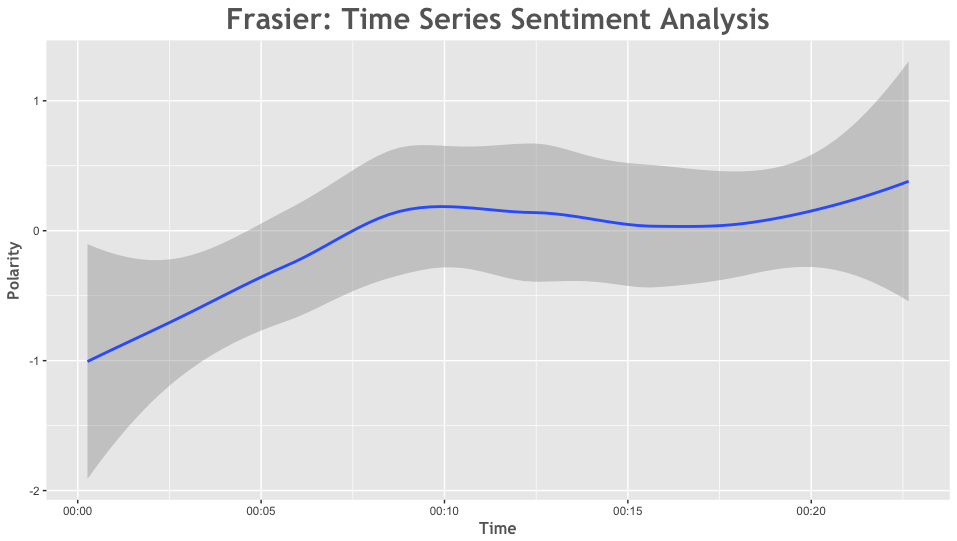 There’s more that you can do with this data, but we’ll take a look at that later.

In the next post we’ll dive in the transcript data and take a deeper look there.