If you follow any news about Google, undoubtedly you know that Google has released a new social network called Google+. At it’s core, Google+ brings the best of each social networking platform to this new service: updates, social sharing, photos and check-ins. IF Google+ is successful, it’s going to be huge for them. Why? They’re accomplishing exactly what shareholders want, users spending more time on their site with their products.

But there’s another interesting, somewhat overlooked feature of the Google+ platform that could ultimately benefit both Google and advertisers: Check-ins. As more users push towards using mobile first, this is quickly becoming a burgeoning area for opportunity among small business owners.

Let’s take a look at the tools that Google has under it’s tool belt:

The Android platform is ground-zero for this entire idea. Everything will feed into the phone and use it’s GPS to determine the user’s location and which deals are available based on checkins through Google+ and past Google Offers. 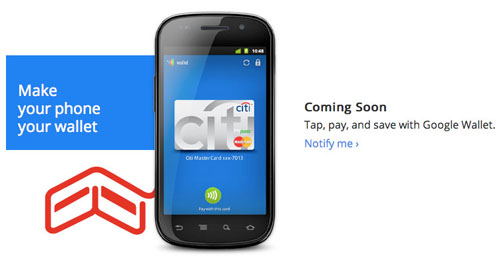 [From the Walstreet Journal:](http://online.wsj.com/article/SB10001424052702304887904576398220617110318.html) By 2014, 70% of U.S. consumers will have smartphones and 52% of those will be NFC-capable, according to estimates by payment consultancy Mercator Advisory Group. Already, app developers, wireless carriers, banks and card companies are racing to shape the potentially lucrative mobile-payments ecosystem. Google also is working with 16 retailers, including American Eagle Outfitters Inc., Walgreen Co., Macy's and Subway, to develop its own point-of-sale service, called SingleTap. Under this system, consumers will be able to pay with credit accounts stored on the phone, redeem promotions and earn loyalty points.

Google Wallet is currently being beta tested in San Francisco and New York, but there should be larger markets opening up by the end of the year.

Businesses can use Google Places to help improve their search results. This can be helpful for both desktop and mobile users. The Google Places app on Android allows users to read reviews as well as check-in to businesses on Latitude and Google+. The more a user checks in, the more rewards they could earn. There’s also a mobile version for web users as well as an iPhone version where users can also leave reviews of the business. Businesses can also offer special deals on the web version of their Google Places page to help entice customers to visit their stores. 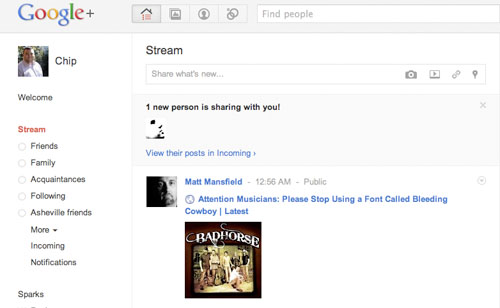 Goolge+ has a better chance with users adopting checkins than Google Latitude because it’s a new service and most users on Google+ might not realize Latitude can run in the background on their phone tracking their every move. Most users are accustomed to checking in on foursquare, gowalla or facebook places, so this would be a welcome addition to most users. It is yet to be seen how Google+ will integrate checkins with Google Places and rewards. 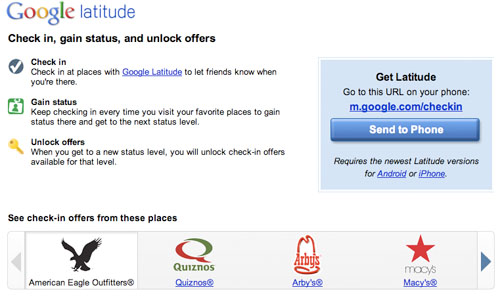 Google Latitude is where things really start to get interesting. Being able to track movements over time as well as the ability to automatically checkin using geo-fencing opens up new possibilities on the analytical side for Google Places. 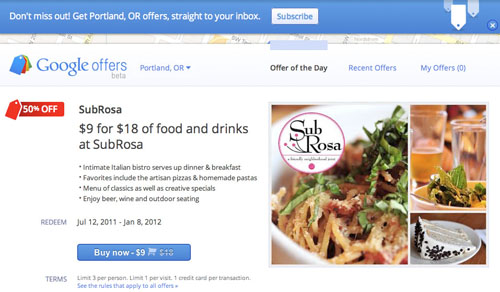 Currently beta testing in Portland, New York City and The Bay Area. Google Offers is likely to be a competitor to Groupon. Users can buy discounts to their favorite restaurants.

Tying it all together

Theoretically, if Google were to tie all of this information together, here’s what I think will happen:

Since all Android phones require a Google account to work, there will be at least one way to track each individual user. As the popularity of Google+ increases, it will become harder for most users to resist using Google+.

Some of these users will ultimately start checking into places with their friends creating yet another piece of the puzzle. Using Latitude’s History tracking, Google can create a profile based on each users most likely time to visit their favorite bar.

Because the phone uses Google Wallet and the user has used it in the past, Google can build a profile of what that customer is most likely to buy.

Since Google can understand the sentiment of the customers visit based on their review, it will know if they are most likely to return again in the future.

Google can the use Google offers to precisely target the customer based on past history, offering them coupons for items their most likely to buy.

Google could help small businesses target and reward a select and highly active group of people without breaking the bank by offering deals such as what we see daily on Groupon.

Which would be a better deal, offer 53 highly active customers 1/2 dinner and 12 somewhat active customers a free appetizer when they check in with two friends or selling 1,000 $25 for $50 worth of cuisine to everyone in your town?

Eventually Google will have the metrics and data to support all of this, but how will customers and users react?

Some advocacy groups will cry foul and see this as an invasion of privacy, but Google answers to its shareholders who demand more ROI from Google’s products.

This type of service would also be a direct competitor with Groupon and Foursquare. It will be interesting to see how the market reacts if something like this were to happen.