Following on the heels of yesterday’s post, I thought it would be interesting to see how Facebook pages handles custom status updates and sharing links.

As you can see from the image above, just like custom status updates for individual pages, facebook will also let you customize who can see your updates for your fan pages.

If your a small business, you probably don’t need to worry about this unless your running special deals in specific areas around your state, but let’s think about it from a large companies point of view.

For example, if you’re Starbucks, you might want to target consumers in a specific area about deals. There are two options, a geo-targeted ad and status update. You’ll pay for the ad, but you won’t be paying for the update.

Once you’ve decided on the general geographic area similar to the image above, you can also choose states and cities separately. You cannot however, drill down to street-level, so you can’t target people within five miles of a store in the 29205 zip code.

If you only have one store in a given zip-code it, might be easier, but it depends on how things are set up. 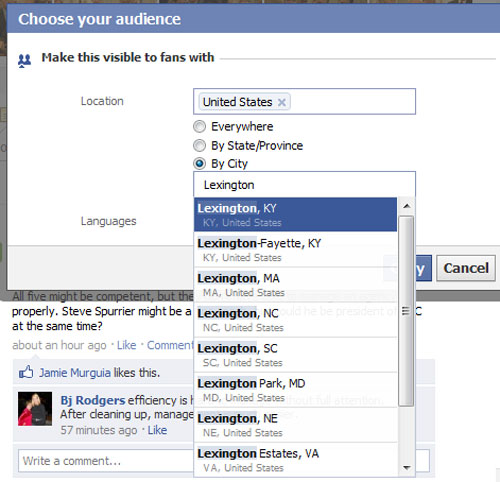 One option I would like to see added is the ability to target facebook’s ‘Questions’ to certain geographic areas. It would be nice to see an integration where we could ask users “We’re thinking of starting a new chapter/business/whatever here, Where do you think it should be?”